Song of the Sea: Silence, Suffering, and Sibling Bonds

Note: I began writing about the voices of Saoirse and Ben before my computer crashed and died, and I only discovered recently that I hadn't lost all my work (hurray!) However, the film is no longer fresh in my mind and my train of thought has very much been broken, so I apologise if my thoughts do not seem so fully formed. Also, this will contain spoilers. 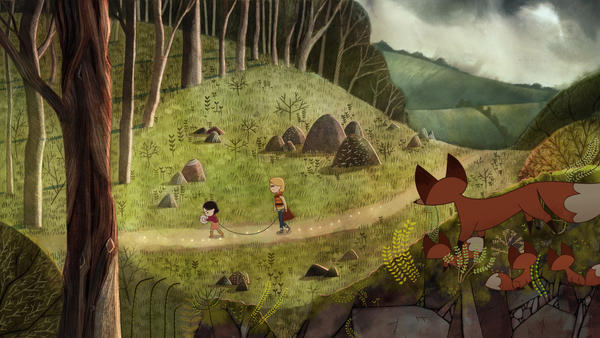 There is a lot of buzz about Song of the Sea at the moment, and rightly so: it is rich in folklore, deeply emotional and visually stunning - not that you would expect anything less from the creators of The Secret of Kells.

I will straight up admit that I am somewhat biased with my adoration of this film, because selkie tales in any form fascinate me. But Song of the Sea...it just 'got me' in that way that art grabs you sometimes. Certainly this was partly down to the distinctive artistic style, transporting us through the tale in a gentler way than the bright and flashy 3D animation we are used to these days. That haunting melody also completely captivated me. It gave me shivers.

But the film lingered with me, and made me think a lot more than most films about what it could be saying, and the wider issues it brought up for me.


Saoirse's silence allows the siblings to embark on the adventure together on a more even ground: she is a mythical creature who cannot speak and doesn't know the songs and stories she is expected to know, while Ben is a mundane creature with the faerie knowledge his sister requires. They are yin and yang, opposites that combine in a perfect whole.

His knowledge is also what keeps him safe. Selkie mother notwithstanding, Ben is a human child and would not under normal circumstances have such 'safe' access to the world of faerie, because, as well we know, fairies are dangerous and fickle creatures and an encounter with them can be deadly.

The human story of family ties and tragedy intertwines beautifully with the traditional folkloric elements, and you don't need to be an expert in Irish folklore to understand that. Selkie and water spirit tales often involve tragedy and heartbreak, and looking at Ben, I wonder if selkies are able to better connect on an emotional level rather than a purely imaginative level with children today in comparison to your classic wolves, witches and fairies.

Ben's voice seems to be the voice of folklore in modern times, recalling the stories nostalgically at the same time as they breathe life into a new story, and a new moment of existence. His voice speaks for Saoirse, for the memory of his mother, but it is also our voice and the subtle reminder that we are constantly in dialogue with these tales, weaving them into our modern existence one way or another.