The Mists of Avalon

I’m late to the party for this book. In some ways it’s unsurprising - it was published before I was born... - but considering how much I love to absorb anything with even the merest hint of Arthurian legend about it, I can’t believe I didn’t pick it up sooner.

But everything in its time, and in its place. I had to read the series chronologically after accidentally starting with The Forests of Avalon two years ago. This is where my OCD twinges come into play: once I knew what I had started, there was no way I could read the final book before the second! Ultimately, however, I think this served me well.

The Forests of Avalon depicts life in Pagan Britain at the start of Roman rule, and we see how the line of Once and Future Kings came to be, through the union of a Roman soldier and a High Priestess. Lady of Avalon follows the descendants of this union, the royal line of Avalon, hurtling through time as Roman rule takes hold and the threat of the Saxons grows. Crucially, in preparation for Mists, we see the divisions growing between Paganism and Druidry, and the emerging powers of Christianity. I will never know if I would have enjoyed The Mists of Avalon quite so much without both these books as the foundations for it.

When I do a quick search of the title I can see straight away that people have had a lot to say, and it has obviously had a lasting impact in the 30-odd years since it was first published. I believe the reason for its enduring popularity is due to its modern views on religion, sexuality and gender roles, even within a medieval setting.


It could be argued that one of the main issues addressed in the novel is of a woman’s status within the court (workplace), including what work it is possible and expected of her to do, and the advancement she is able to achieve - contemporary issues of “glass ceiling” feminist thought prevalent in the 1980s, when this book was published.

Sadly, this is still an ongoing battle today. The Fawcett Society states that the overall gender pay gap for full time workers is 13.9% due mostly to discrimination, unequal caring responsibilities, a divided labour market, and men holding a majority of the highest paid and most senior roles. The plight of the women in the novel is still one that women today can easily relate to.

There is a thorny tangling amongst the apparent dichotomy of Avalon/Camelot, Paganism/Christianity, Matriarchy/Patriarchy; such complicated relationships would have been misrepresented if their treatment in the book had been anything but murky, ping-ponging back and forth. It was at times tempting to idealise Viviane’s matriarchal society in Avalon, especially as we saw the devastating and violent effects patriarchal Christianity had on Gwenhwyfar; but it was in no way romanticised or glorified as perfect. If anything, Viviane would be considered one of the more ‘villainous' characters of the book.

And yet, there was no place for these women of Avalon in the new Christian-led world:

Yet all of the main female characters in the text who reject their expected female roles are rejected by the world of Camelot: Viviane, Lady of the Lake, and later Morgaine, are seen by society as devil-worshiping sinners for their refusal to be silent in social and political arenas. Morgause, sister to Morgaine and Queen of Orkney, is similarly shunned by society for expressing her sexual freedom, speaking out against patriarchal reign, and ruling the kingdom of Orkney equally by her husband's side. Significantly, all of these women also reject Christianity and God in favor of paganism and the Mother Goddess.

~ source: an online analysis of social concerns within the novel.

For all that this book champions female sexuality and a woman’s right to choose what she does with her body, there is one choice that is never questioned: the choice to have children. Childbearing and rearing is the default normality for women in the novel, which is a shame. Considering the progressive narratives throughout the series regarding homosexuality (particularly with regards to Caillean in Forests and Lancelet in Mists), this could easily have been another arena to explore.

All Gods are one God


There is a continuous argument in the hearts and minds of Morgaine and others, such as Lancelet, raised in Avalon: if all gods are one and the same, how can the Christian god have such a detrimental attitude towards women, when the reverse is true of their Goddess-centred worship? It takes some time for Morgaine to realise that the fault is not in the God, but in the men who speak on His behalf to solidify a patriarchal system that oppresses women.

This torment is most clearly illustrated through Gwenhwyfar, who accepts whole heartedly the concept of original sin and her innate ‘evilness’. I was routinely annoyed by her sanctimonious preaching, but had to catch myself at moments of feeling real anger towards the character - it is misplaced anger that should be directed towards the systems that manipulated her. Gwenhwyfar is unable to reconcile her desires with her beliefs: she wants sex for pleasure, not just for procreation; she blames her ’sinfulness' for her barrenness; and her mind is in turmoil as her instincts rebel against the Christian dogma.

Bradley herself wrote an essay on the issue:


One of the main problems I had, in writing the Arthurian novel, was the fear that Christians would feel I was attacking the basics of Christianity, rather than the enormous bigotry and anti-feminism that have become grafted on to Christianity. I don't think they have any part in Christianity itself, or in the teachings of Christ.

For me the key to "female personality development" in my revisionist, or better, reconstructionist version, is simply this. Modern women have been reared on myths/legends/hero tales in which the men do the important things and the women stand by and watch and admire but keep their hands off. Restoring Morgan and the Lady of the Lake to real, integral movers in the drama is, I think, of supreme importance in the religious and psychological development of women in our day.

I think it's overwhelmingly important to remember that it is not an attempt to supplant "God," presumably the "real God" fundamentalists talk about, with "a lot of pagan Goddesses and idols." What we are seeking is the female aspect of Divinity itself; Goddess as an extra dimension of God, rather than "replacing God with Goddess." The Divine is. It's very important to remember one of the tragically few public utterances of the shortest-lived of the Popes, John Paul I; he said (I paraphrase, but I think I am close to quoting exactly):

"It is important to remember that God is our Father; but it is equally or more important to remember that God is our loving Mother." Even when we think of God as The Goddess, it is no different than the difference between seeing God as "Fount of Eternal Love" or "Giver of Justice" or "Provider of Daily Bread" or "King of Kings." We are not, by those names, worshipping four different Gods, but four names for the ultimate Divine. (I don't think the so-called worshippers of "Pagan Gods and Goddesses" were, either; they were seeing the outpourings of the Divine in different lights, which they called Zeus and Apollo and Artemis and Isis and so forth.)


I’ve quoted a fair bit, but the entire essay isn’t too long and well worth a read for those of you who are interested: Thoughts on Avalon.

Heroes, heroines, and a whole lot of villains


One of the joys of this book, for me, was the depiction of the infinite shades of grey within each character. Unlike the male-oriented epic hero versions of these tales, the novel focusses on the internal lives moreso than the outer deeds (case in point: the grail quest is  not followed at all; the fate of the companions is mentioned but the focus is on the emotional and spiritual reactions to the events).

This allows us to explore the inner worlds of the characters in much greater depth, which is especially important for female characters who, particularly when not inhabiting major roles, are so often reduced to stereotypes who perform little more than a function. This fact in itself is alluded to in the book, when Gwenhwyfar is considering whether she can be more than either the Madonna or the Whore. 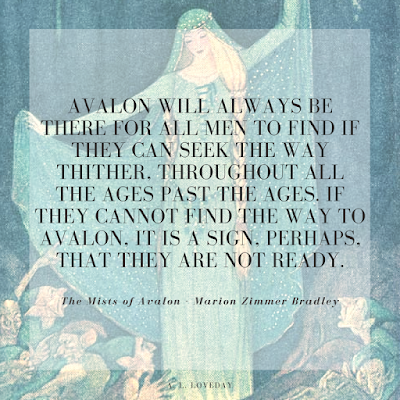 They are all heroes, they are all fallible, and they are all the villains in their own lives too, just as the Goddess has many faces: the maiden, mother or crone, bringer of life or death, creative or destructive. She is all things at all times - good, bad, and neither, for She is what She is. “I have called on the Goddess and found her within myself," says Morgaine - and that is probably my biggest take away from this incredibly thought-provoking fantasy.

Sources:
Mists of Avalon online study guide
Marion Zimmer Bradley's own essay, Thoughts on Avalon
Feminism vs Frye in Mists of Avalon
Book covers were sourced via a Google search
The final illustration was sourced via Sur La Lune; the artwork is by Elenore Abbott.